Taff Rapper power through their performance at the showcase, as Martyn Goodwin (the Tommy) peers round the side and gives the audience a cheeky wink.

Cardiff’s finest rapper sword dance team hit Bristol with a clash, as they displayed a fast and furious routine at an international competition.

New kids on the block, Taff Rapper, made their debut at The Dancing England Rapper Tournament (DERT) on Saturday 13th, showing off a unique rapper sword dance routine and fast fiddle playing, while leaving the crowd in stitches with their hilarious Tommy (a character who makes jokes to the audience).

The team travelled across the waters to the biggest rapper sword dance event on the calendar, which saw around 30 teams coming to compete from as far away as the USA.

Despite not dancing in the main competitions, held in the city’s bustling pubs, the crowds enjoyed seeing Taff Rapper at the evening showcase in St. George’s, as the Welsh wonders showed off their new skills and smart red and green patriotic sashes.

Taff Rapper dancer, Jonathan Baker, said: “DERT was intense. I’ve danced rapper for years, but I’ve never been to an event like this or realised that so many other sides exist.  After watching all teams at the competition, I realised how far I still have to go as a dancer. The Newcastle Kingsmen showed supreme skill and refinement in their dancing, and Black Swan Rapper had amazing energy and enthusiasm – it’s hard to say who my favourite side was!

“Edwin Dyson, our squire, did a heroic job of organising the event.” 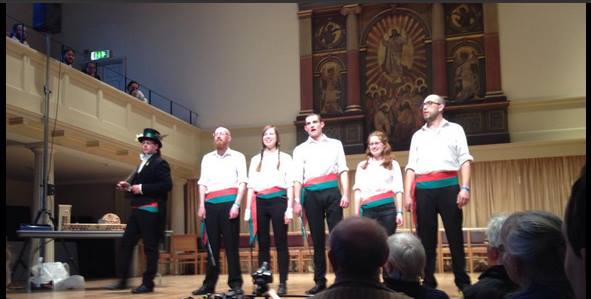 The team sing their calling on song in St. George’s to an expectant crowd.

Rapper sword dancing originates from the North East of England, as the miners in the 1800s used the swords (which were originally pit tools) to develop traditional long sword dances, performed to live music.

DERT, a modern tournament, which took shape in the 1980s and 90s, sees performers judged on skills such as stepping, sword handling, Tommying and music.

Cardiff’s Taff Rapper are now practising in Dempseys, Castle Street, from 7.30pm – 9.30pm on Thursdays, and are always keen to recruit new members.

DERT will be held in Manchester next year, and the results of this year’s competition can be found online at: http://www.dert2015.co.uk/after-a-bath-a-brew-and-a-nap-here-are-the-results-of-dert-2015-in-bristol-thanks-to-all-who-took-part/.

Taff Rapper perform in The Pen and Wig, Cardiff, with their musician Charlotte Goodwin.